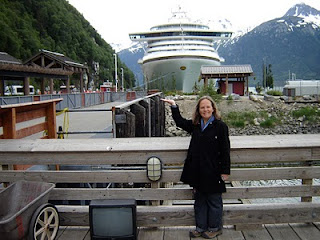 We're sailing through the waters of the Johnstone Strait with Vancouver Island a half-mile off to starboard, visible from our balcony window. Melinda is perched on the balcony scanning the waters for the black finger-like protrusion of the dorsal fin of an orca. Sandra, the ship's naturalist, says there's about a 33% chance of seeing some in this area. She is on the bridge watching for wildlife and occasionally comes on the ship's loudspeaker to call attention to something she has spotted. In our stateroom we can tune the television to channel 34 and hear her narration as we sit on the balcony.

The orcas in this area are called "residential orcas" because they stay in the area year-round and eat fish. The "transient orcas" further north devour warm-blooded mammals like seals and the calves of other whale species. They vacation off the northern Alaskan coasts when the humpbacks and others return in the summer.

In this narrow strait through which we are traveling at the moment the orcas will find schools of salmon, herring, and other fish to feed on. It is a sort of whale buffet. Speaking of buffets, we have had a day of feeding as well.

Following a light breakfast in the International Dining Room we went to the theater where Amedeo Scarin, the Executive Chef who oversees the preparation of 17,000 meals a day on board the Diamond Princess and Jacques Ghennai, the Maitre d'Hotel who oversees the staff of servers and stewards, presented an entertaining culinary demonstration. Following their presentation we joined several hundred other curious cruisers on a parade through the ship's main galley to see where this work was done.

The entire ship operation is fascinating to me. It is a floating city and the logistics are overwhelming. Yet everything from navigation to communication to hotel services to food services to travel services to entertainment to shopping services to engineering are managed with such amazing coordination.

Not long after our tour of the galley we visited the pastry buffet for a sampling. Then the won-ton soup buffet. After a brief retirement to our stateroom we went down to the Explorer Bar for an authentic English pub lunch. We chose the fish and chips. A while later it was time for Afternoon Tea in the Pacific Moon Dining Room. We'd not availed ourselves of that experience all week, so we gave it a shot. After visiting with one of our fellow travelers on the stern of the ship, we returned to our room for blogging and whale watching.

Tonight we pack our luggage, go to dinner, watch a magic show in the theater, and then spend our final night aboard ship. Sometime around 7:00 AM we will dock in Vancouver and by noon we'll be at the airport awaiting a flight to Seattle. 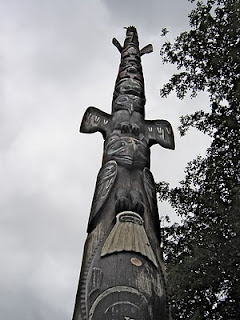 Ketchikan receives around 200 inches of rain a year, around 16 feet. Today it was partly cloudy and dry. We sat high in the stern of the Diamond Princess in an observation area that by night is the Skywalker Bar and watched the captain gently dock this floating city next to the pier. By 9:45 AM we were off the boat on Alaskan soil for the final time.Our plan was to take the public transportation from a bus stop just across the road from our pier ($1) to the Totem Bight, a state park a dozen miles south of town. Sandra, our ship's naturalist, told us about the place. We would be there at low tide, which allowed us to climb over the volcanic rocks in the tidal flat looking for some of God's creatures stranded by the ebbing waters.

My previous experience with catching the right bus had not gone so well in Oaxaca, Mexico. But we had our instructions -- catch the Blue Line South. While we waited for our ride two bald eagles flew overhead. The bus was almost half an hour off schedule, but we managed to get on and join a capacity crowd for the trip to Totem Bight.

The park is called Totem Biight for two reasons. First, it is a bight, or a place along the coast where the a chunk of land is missing. Second, it is the location of a collection of totem poles created by indigenous people. The totem pole is not an object of worship, but, like the stained glass windows in our cathedrals, a means of telling a story to preliterate people. 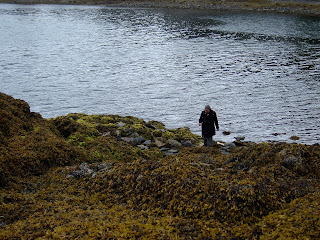 We joined a handful of others combing the tidal flat. The footing was a bit treacherous, but the rocks and tidal pools held plenty of treasures. We found an octopus, three bright orange starfish, a dozen or so purple starfish, limpets, crabs, and sea anemones. We visited the clan house and totem poles and waited for our bus ride back. By 3:00 we were let off beside our ship, went aboard for a quick lunch, and then returned to walk the streets of Ketchikan.

The walk took us to a bridge where six or eight young people were fishing for salmon. The bridge crosses the mouth of Ketchikan Creek and chum salmon are beginning to appear, staging for their final migration up the creek in the next few weeks. We saw several leaping from the water at the mouth of the creek.

Crossing the bridge we turned left onto Creek Street, which is actually a board walk that took us alongside the creek and through a canyon of shops attempting to lure tourists inside. At the end of Creek Street we walked on Married Man Trail and then on to the Totem Heritage Center, Bald Eagle Rehabilitation Center, and Salmon Hatchery run by one of the local tribes. By 4:00 PM we were on the return route, and were back aboard ship by 5:00. From our balcony we watched nine bald eagles fishing in the bay behind our ship. At 6:15 the Diamond Princess was pulling away from the pier and heading south for the final 500 miles of our 1500 mile voyage. We will be at sea all day on Friday, arriving at Vancouver, BC early on Saturday morning.

Melinda and I had only a few goals as we planned this trip. We were interested in encountering as much of the Creation as possible. The shopping and touristy excursions were not on our list. We wanted to see glaciers, whales, bears, caribou, moose, eagles, and wolves. We wanted to look out on snow covered mountains and to walk in rain forests. We wanted to see the majestic Denali. (I wanted to ride a train.) We checked these items off one by one. When we stood today and saw salmon leaping from the creek, I turned to Melinda and asked, "Is there anything else you want to see?" It was as if we'd marked through the final item on the list. The weather was unusually good by all accounts of those who have made this trip before. Denali showed itself to us on three successive days. We saw more whales than our ship's naturalist had seen on one trip. Glacier Bay was incapable of description.

We are on our way home now. Texas heat and humidity. Shopping and cooking for ourselves. No maid service. No buffet. Responsibilities. Lawns to mow. Gardens to tend. We will learn to adjust.

Thanks again, UBC, for a generous and much appreciated gift.

Posted by Robert at 2:22 AM No comments: