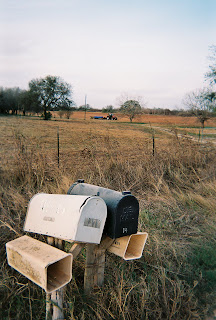 It is the winter solstice, the shortest day of the year. I spent the longest day of the year in Fairbanks, Alaska, exactly six months ago, standing outside at midnight with the sun still visible. As I sit in the front porch swing and write, the December full moon rises in front of me, big as a Texas orange. It will eventually become gleaming white, bathing the field before me with enough light for even my ancient eyes to read by.

I came to the farm alone today, ostensibly to paint. The walls of the old house need it. I doubt they’ve felt the bristles of a paintbrush since they were built in the early 80’s. But the work is just an excuse. It always is. “I really have to go mow the place.” “Those trees need trimming.” I sometimes suspect that I come here not because I have to, but because I must. It is more of an internal need than an external one.

I did not choose this place. It is not my favorite part of Texas. I love the rocky Hill Country and the rolling farmland of central Texas. I think this place chose me. My grand-parents and great-grand parents lie beneath its soil -- the Creeches, Cryers, Cockes, Rossers, and Martins some two miles southwest in Floresville and the Culpeppers a dozen miles northeast in Stockdale. They all came here a hundred and fifty years ago when Texas had been a state for only a couple of decades. I probably made my first trip to this spot fifty-seven years ago next weekend. I say that, not because I remember, but because we always came out here at Christmas to be with my grandparents. I’m sure we did my first year.

Now, almost sixty years later, I still come. I come with my family and I come alone. The ritual of arrival has become rather fixed for me. Before I enter the house I walk around the property. I notice the fresh mounds of soil excavated by our resident gophers. At times the feral hogs have also left portions plowed up as result of their visit. Mesquite branches that failed to endure a recent windy south Texas day lie scattered on the ground. I walk out on the berm that twists, serpent-like, through the field behind the house. Today I see that Herb has done his planting and small green blades of winter wheat are just now poking their heads up through the red soil. By March they’ll carpet the place with a blue green beauty that will turn golden by May. The two bird feeders are empty and dangling askew in the mesquite tree in front of the house. I replenish them with seed and fill the bird bath with clean water. In no time a pair of cardinals take advantage of my provisions.

I have a trip to make into town to get my own provisions. Tonight I will eat fresh squash, onions, tomatoes, and bell peppers layered with cheese and marinara sauce and baked until they are bubbly and melty. That will be lunch as well. Tomorrow night I will enjoy borracho beans, rice, and tortillas. That is part of the ritual as well. While in town I paid my taxes, thinking of Luke’s Christmas story, KJV – everyone returning to the land of their ancestors to be taxed.

Winter means the place is dead. Nature is not fighting back. The grasses and weeds about the house lie dormant. Spiders and grasshoppers no longer challenge me as I approach. I don’t have to do violence to them and their habitat with the old riding mower. Instead, I will work indoors. Today I have cleaned, moved furniture, and prepared for the mindless work of painting tomorrow. I put Christmas music on the stereo, turned it up loud, and dragged heavy Lazyboy sleeper sofas from one room to another (My grandmother left three such pieces along with at least five Lazyboy recliners. I wonder how the company has stayed in business since her passing.) I washed linens, made beds, and cleaned out the refrigerator.

I have thought of my grandmother, Lillie, often as I worked today. She is still so much a part of this place. I washed a casserole dish accidently left in the refrigerator since Thanksgiving. In black marker her initials were scrawled on the top – “L.V.C.,” signifying those days when the dish had borne her contribution to assuage the grief of a neighbor. I thought about the place where her garden grew as I walked through the back yard. I saw the evidence of her handiwork in a piece of crochet. The house still smells a bit like her perfume.

We have so much we want to do here, but progress is slow. Just twenty feet in front of me grows a pecan tree my dad planted who knows how many years ago. Now it reaches thirty or more feet into the air, rising above the house. Creation’s time moves so much slower than ours. I want things in minutes, hours, or days, and the Creation lives its life in terms of decades, centuries, millennia, and eons. Trees don’t seem to be hurried.

Orion’s Belt lines up its three bright stars directly in front of me. The moon rises higher now, and an owl calls from the trees on the fence line several hundred yards to my left. An insect buzz rises from the thicket to my right by the old stock tank. Herb’s livestock protest his driving the tractor through the field across the road in the dark. It is all so familiar.

Plenty to Be Thankful For 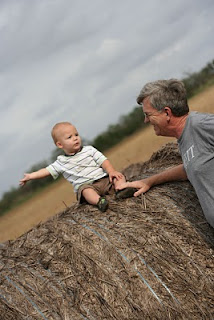 Thanksgiving week was full and rich. Early Monday morning I drove to the farm alone, being the early arriver to get things ready. I took care of the usual chores – purchasing enough groceries to get us going, mowing around the house, clearing the dead limbs fallen from the mesquites, and turning the water heater from Vacation to High. Murray, our ancient lawn tractor, had apparently picked up a thorn in his left front foot during our last outing and could not join me, so I walked behind the small lawnmower, taking twice the time.

I worked outdoors most of Monday, until it was dark. Then, returning the tools and equipment to the garage, I entered the house, groping for the light switch. I found it and turned it on to get the overhead light in the garage. No response. Bulb’s probably out. So I found the switch for the utility room. Nothing. The guys installing the furnace a couple of weeks ago must have turned off the breaker. So I felt my way into the dark house and discovered that none of the lights were working. I walked to the front door and gazed across the road. No lights on at any of the neighbors’ homes either. I called Janie who lives at the top of the hill and caught her shopping at HEB. She called home and checked and called me back. Power was off all down the road.

So, sweaty, gritty, and hungry, I sat on the front porch in the dark for a while. Shower and supper would have to wait. It was not long before lights flickered on and I went inside. I turned on the shower and let it run. When I came back a few minutes later, the water was still ice cold. Furnace guys had turned off the gas for the install and had not relit the pilot on the water heater, I guessed. This time I was right. So I found some matches, lit the pilot, and proceeded to dinner, still sweaty and gritty.

Tuesday morning I went rock hunting. The goal was to build a campfire ring in the backyard out of local stones. I took the wheelbarrow and a hand pick and walked through rows of tall sorghum sudan grass that remained in the field, looking for pieces of sandstone or flint at least as large as my fist. I took my quest down the road to the far end of the field for a while, and then down the county road to an outcropping of eroding sandstone where large pieces were falling off onto the roadside. Eventually I had managed to gather enough to construct a ring five or six feet in diameter. I found enough dead limbs around to erect a campfire-sized stack that would turn the marshmallows, Hershey bars, and Graham crackers I’d picked up at the HEB in to ‘smores for my grand-daughter when she arrived.

Tuesday evening Alan and Kat arrived with their kids and and their dogs. I had a now traditional farm meal waiting: borracho beans, a pot of rice, and pan of cornbread. Melinda and Jenna showed up a bit later, and we had a full house. Wednesday was spent exploring with grandkids, planning a Thanksgiving meal, and battling the other last minute grocery shoppers. The campfire was a big success and an encore was requested for Thanksgiving evening. Thursday morning was all about cooking. When it was time to eat, we spread a feast on the picnic tables and enjoyed the creative work that Kat, Jenna, and Melinda had invested in all morning. Then naps.

The weather remained unseasonably warm, in the 80s, through Thanksgiving afternoon. Then, near sundown, we were sitting at the picnic tables. I'd been gathering some more dead mesquite limbs for another round with the 'smores and campfire. Suddenly -- really suddenly -- the still, warm air was replaced with a stiff, icy wind from the north. It was exactly like someone had turned on a massive air conditioner. We all offered an "ooooohh!" at the same time. By morning we were looking at 36 on the rusty front porch thermometer.

Friday the kids went into San Antonio to a museum. Jenna took a car and headed to Houston to visit friends home from college. And Melinda and I had the place to ourselves for a while. She worked on papers and I spent the day reading and walking and resting.

Saturday we all returned to San Antonio for a day at the zoo – riding the train around Brackenridge Park, gawking at animals, and laughing at grandchildren. We had dinner at La Gloria Icehouse, a restaurant near the old Pearl Brewery on the San Antonio River featuring Mexican street food. Five stars. Definitely try the molcajetes.

Sunday morning included a picnic at the Pecan Park in Floresville. The kids and grandkids headed home. Jenna returned from Houston and she and Melinda loaded a car and made the trip to Austin to drop Jenna off and then on to Waco. I hung around to finish the clean up and followed a couple of hours later.

Melinda and I returned to Waco just in time for the first Sunday of Advent service at UBC. We saw our friends, sang Christmas carols with the David Crowder Band (a first for us), and went home exhausted from several hours of driving, a week of grand children, and a good bit of work. But it was that kind of tired that is good. Very good.

I could have asked for more -- having Taylor, Amber, Ava, and Jonas with us from El Paso would have been good, although we'd seen them a couple of weeks earlier. I have much to be thankful for these days.

Kat has documented all this in photographs quite well on her blog.